Author and references
Traveler's Heart is a set of artifacts from Genshin Impact. 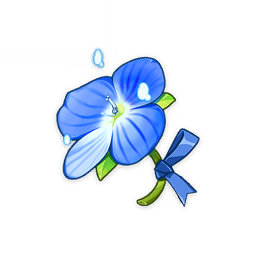 «A small celestial flower in whose stem they knotted a ribbon. »

The traveler from a distant land carried this flower on his chest.

The traveler left his privileged life behind to live a wandering and carefree one.
Beside a transparent freshwater lake from a foreign land, he encountered a maiden who was frowning.

"Are you a traveler from a distant land? Well, not that I care ...
Oh so you are a musician? So please don't insult me ​​with pretty words or empty songs, please.
Remember me as I am:
a trophy to be given as an offering for the 'festival'!

The traveler, who had left his homeland, carried this flower on his chest.
He wanted to remind himself not to love anyone and not get attached to anything in the world.
However, he did remember that young woman, just as he had promised, and he was willing to risk his life for her. 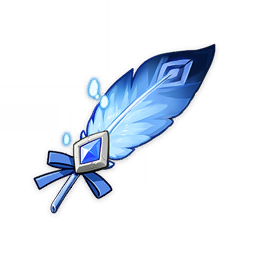 A blue arrow pen. It carries in it the nostalgia of the traveler. »

A ruthless power shattered all hope and made the promise of seeing each other disappear like fleeting shadows.
The wandering traveler had once again lost the place he called "homes."

The disdainful evil stole the joy of his beloved, And the intermittent conflict shattered his irreverent soul.
Those soft and playful melodies like a fairy.
They became a metallic sound, sharp and latent.

For his comrades, for his best friend, for the tables where no one would drink wine again ...
For freedom, for life and for revenge for the evil that had taken her smile.
Thus, with great resolve, the Traveler touched the lyre for the last time and fired his last arrow.

When he was already used to living in this foreign land, one day he looked up at the blue sky.
Then, he knew that the sky was the same as that of his homeland ... 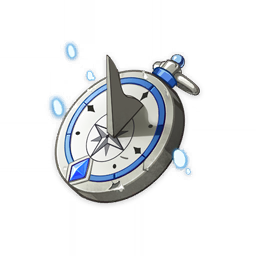 «A sundial that bears witness to the change of the ages. Eternally and silently record the flow of days. »

The traveler pursued both fate and the inexorable passage of time.
In fact, in its eternal flow, you could see the end of the Orchestra that opposed the aristocracy.

In the course of a long journey, even the best-made watch can stop working
The only thing that will never go out will be the light of the sun and the moon.
Therefore, the Traveler had to compete against that light to be aware of the passage of time.

On the one hand, there were the grandiose mansions of the nobles, and, on the other, the Orchestra, which never rested to overthrow the tyrannical regime.
The passage of time stirred both alike, causing them to suffer the same destructive fate.

Beneath the moonless night sky, the dark shadows reflected the stranger's weariness.
"When the fleeting glow of the arrows disappears, the melody comes to an end.

Will I see you smile again when the tower falls in the city square? "

'An austere white porcelain goblet. Once it was filled with liquor until it overflowed. »

The lyre has four strings.
The days that the Traveler spent with his companions in the Orchestra were possibly the happiest of his wandering life.
At first, it was just a chance meeting with the director.
But the invisible strings of fate led the Traveler to the young woman whose sword was a flute and a man named "Kreuzlied".

In the midst of the singing and dancing in the merry tavern, the lyricist introduced his comrades to a maiden whom he had met by chance.
The Traveler, who was drunk, strummed the strings and sang aloud.

With the Orchestra musicians by his side, he would never have to travel alone again ...
Perhaps he could travel with them until the end of their journey. 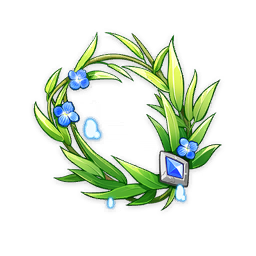 «A wreath of flowers that gives off a spring scent. »

Before leaving, the Traveler took this wreath of willow branches as his last memory.
If he kept it, he would always remember his beloved, who had disappeared like a dandelion blown in the breeze.

The traveler was a wandering lyricist, and the maiden of the land of wine was a prisoner of the nobility.
For reasons not even known to himself, the music of his lyre revealed his true heart.

"What moves me the most about you? Your smile, of course.
Because, since we met, I have never seen her.
I promise you that I will break the chains that have you imprisoned.
When that time comes, will you let me see your smile? "

"Yes, thank you very much. It would be wonderful if you could do that."
What the lyricist told me sounded very good, of course, but who could trust the words of someone who is dedicated to singing?