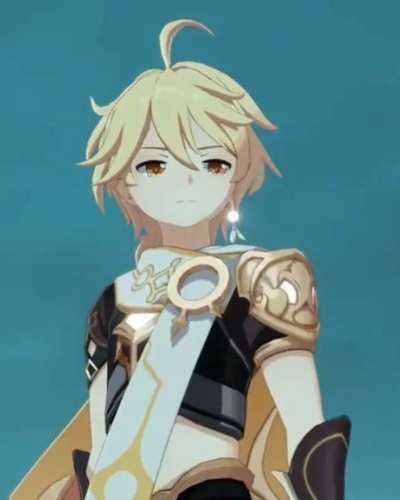 El Traveler's Brother, also known as the Prince / Princess, is the lost brother of the Traveler and leader of the Order of the Abyss. The Traveler's main objective in Genshin Impact is to find and reunite with his brother, traveling through Teyvat, gaining information about them by meeting with The Seven.

Outsiders do not belong to this world.

One day this journey will come to an end.

One day we will meet again, brother. But it will not be here, nor now.

We will see you at the end of this journey, once everything has been put in place.

Then, you will understand everything. »

The appearance of the brother is almost identical to that of the Traveler, no matter what gender is chosen. This is argued in that they are twin brothers.

Both brothers have blonde hair, slim complexions, golden yellow eyes, and fair skin. They appear to be physically in their teens, they are shorter than adults but taller than most children.

Ether wears a black cuirass vest along with a white scarf cape with gold embroidery. He wears black pants, gloves, and boots. Her hair is medium cut with a long braided ponytail.

Lumina wears a sleeveless white dress with layers of train and bracelets that cover her thumbs, with white stockings and boots. Her hair is medium cut with two short, straight tails.

Thus revealed, certain parts of both brothers' clothing light up based on their current element. In the opening scene, both brothers are seen in bright white lights.

While the player's light will change depending on the game, the lost brother's light seems to remain white until now.

The brother has a vengeance against the divine after concluding his journey through Teyvat for unknown reasons. He is exclusively dedicated to achieving the objectives of the Order of the Abyss, regardless of what must be done to achieve them. Despite their questionable actions, the brother still cares for the Traveler as they express a desire to return home with them after finishing their goals and convince them to continue their journey through Teyvat to witness the truth themselves, instead of forcing your views on them.

During the opening scene of Genshin Impact, both brothers fight the Unknown Goddess. Depending on the gender chosen by the player, they will be given a name and become the Traveler. The other brother (Ether or Lumina) will be attacked by the unknown Goddess, captured and sent away in cube form. The Traveler will continue to fight before being subdued and losing his powers, sent to roam the earth until he finally meets Paimon.

It is currently unknown how much time passed between the arrival of the brother and that of the Traveler. Although it is speculated to be around 500 years old, due to the great disaster that befell Teyvat witnessed by the lost brother. During the period between the Traveler's arrival, the brother has gained control of the Ruins Guardians in addition to gaining leadership of the Order of the Abyss.

During the Traveler's adventure through the city of Mondstadt, the lost brother discovers that the other is alive and ecstatic. Unfortunately, they tell themselves that they cannot reunite until they have finished their own journey through Teyvat.

The brother is also the one who ordered the Abyss Wizards to turn Dvalin into the Stormterror. Although it is currently unknown why this is the case and what are their reasons for creating a conflict.

In a paid Genshin Impact ad by miHoYo called "We Will Be Reunited", also uploaded to Genshin Impact's official YouTube channel, the lost brother appears as Lumine, watching his brother travel the world and fight monsters without his brother knew. Lumine says:

At the end of Chapter I, Act IV: We Will Meet Again, the lost brother can be observed appear from an Abyss portal to protect the Abyss Emissary from Dainsleif's attack. With the Traveler wanting his brother to return to his side, the latter refuses, stating that his war with the Celestial Order will not end until the Abyss engulfs the thrones. In turn, he affirms that he has already traveled through this world (implying that the lost brother woke up 500 years before the other while fleeing from Teyvat) and that, when they reach the end of the trip, as he did, he will see for himself himself the true nature of Teyvat.