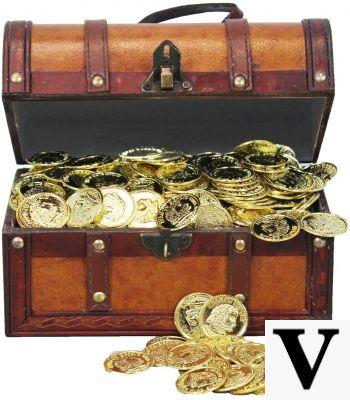 The pirate treasure is the first act of Kaeya's legendary quest: Pavo ocellus.

During the act, Kaeya asks the Traveler to find her grandfather's secret treasure, unaware that a hidden ear caught their conversation.

After the Stormterror attack, the Traveler and Paimon run into Kaeya at the Knights of Favonius Headquarters. They notice that Kaeya is worried about something and ask her what's wrong. Kaeya takes them to the courtyard and informs them that her grandfather was a pirate who had a legendary sword of Celestia that he buried to avoid conflict between his fellow pirates. He is concerned about the recent activity of a local group of treasure hoarders who may discover the ruins and steal the sword. Kaeya suggests that they go to the Adventurer's Guild to ask more about the ruins.

The visit is meaningless since no one is aware of the existence of such a place. Upon returning to Kaeya, he reveals that he found someone who knows about the ruins, but for the sake of confidentiality, they must meet the informant in the Whispering Forest. They find the contact being attacked by monsters and rescue her. Knowing why they arrived, he hands them a map with a message: "Three six-armed giants live in the lake city. Two guard the statue, one guard the treasure."

The Traveler, with or without Kaeya's help, finally reaches a nearby windmill. They find another map with a message on one of the windmills, which leads them to a waterfall behind Aguaclara .: "She doesn't love him at all. The passion that flows in the clear waters is just a facade. When it's cold and she is alone, her true feelings overflow ". Finding the map of the Arcadia ruins, Paimon thought that they should find the sword themselves.

Upon reaching the end of the ruins, the Traveler and Paimon are ambushed by Izzard, the leader of a group of Treasure Thieves. Order the Traveler to stand aside or he would put his crew on top of them. Kaeya arrives soon, revealing that the treasure hunt was simply a ploy. Izzard is impressed with Kaeya's tactics, but refuses to be captured. However, in his attempt to escape, he sets up a wreck guard who pursues him. Kaeya and the Traveler destroy the Ruins Guardian before stopping the criminal. When Izzard is taken away, Kaeya apologizes to the pair for cheating on them, but claims that the ploy was aimed at luring the Treasure Thief crew and stopping them. As an apology, he offers them the Sword of Dawn and vows never to fool them again. If the Traveler completed the treasure hunt without his help, Kaeya is impressed by his abilities and returns to headquarters to interrogate Izzard.