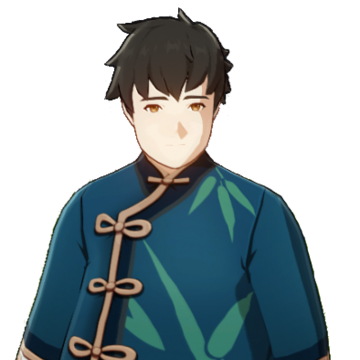 The Infant Jiang is a non-playable character from a side quest in Liyue, with whom the player must play an innocent game of hide and seek to complete the quest and learn more about the character.

While growing up, his parents realized that he had a mental illness that did not allow him to develop the maturity of a teenager, his body grew but his mind remained that of a child. His father, Shaoyuan, was a veteran soldier in the Liyue Geoarmada, who decided to seek a cure for Jiang's illness at Bubu Pharmacy, taking that task as his last before his retirement from the Geoarmada to spend the rest of his days in peace with his family, however he died right after on a mission, the cause is still unknown.

His mother Ruiya, now a widow, received the support of various members of the Geormada for the honor and respect they felt for her husband and was able to continue living peacefully with her son Jiang, who could not receive a cure for his mental illness. It was not long before a fatal accident occurred: Ruiya wanted to play hide and seek with Jiang who, following the example of his father, had hidden on the edge of the cliff assiduous to his home, his mother while looking for him ended up falling down the cliff , dying in the process; Jiang, still in hiding, did not realize what had happened and kept his hiding, even when members of the Geoarmada arrived in search of the family, it was they who found his mother's body and buried her next to her husband.

Days later, Jiang came out of hiding, famished and confused after not being found by his mother for several days, it was then that a distant relative visiting the parents' grave found him and decided to take care of him. No one has been able to explain to Jiang what really happened, all the members of the Geoarmada who fed him out of compassion, watched in perplexity as slowly the mind of the innocent child was trapped in a body more and more of an adult, who without even being able to read, you will never understand the meaning of the tombstones next to your house where the people you have been waiting for years lie. It is unclear when the events in Jiang's story occurred, but looking at how he currently has the body of a young adult, it would not be strange to think that it was more than a decade ago.