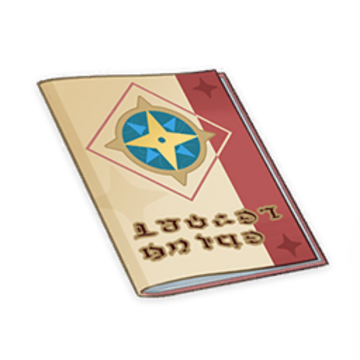 Teyvat Travel Guide is one of the Genshin Impact books.

«A magazine of the Adventurer's Guild. Each issue shows great landscapes from all over Teyvat. This issue includes a short diary of Alice the Traveler in Mondstadt »

The three Hilichurl tribes located in this valley are densely populated. What if we built a huge ball-shaped revolving cell in the center of the valley and threw all the Hilichurls? That way, we could generate enough energy to power all Mondstadt factories for at least five years. If we go one step further and grind up Hilichurls that are too old or too weak as a food seasoning and feed it to the strongest, we could build a perpetual motion machine that could support a factory as large as Snezhnaya!
It seems totally feasible to me.
But when I shared this idea with Miss Lisa, she looked at me and pondered silently for a long time. Then he subtly changed the subject.

Archon Anemo is too undisciplined for me. If I were a god, I would not have allowed my kingdom to be so disorganized. With enough bombs placed in the proper position, even the gigantic Starry Cliff would crumble in a second. With flatter terrain, Mondstadt would be much better organized.
But that astute Quartermaster of the order rejected my proposal as soon as she heard it.
He even asked me to stay away from the Starry Cliff.

This is one of the few places in the whole of Mondstadt with somewhat flatter terrain. In the center is a large oak tree, and Vennessa is said to have ascended there. I searched the entire tree for a long time, but couldn't find a launch device.
I grabbed some nearby Hilichurls to test my theory. Unfortunately, the longest flight distance was to the hunter huts near Aldea Aguaclara. What a disappointment.

My failed experiment caused quite a stir in the Clearwater Village, so Miss Jean of the Knights of Favonius ordered someone to keep an eye on me. The only thing I could do all day was stroll along the Falcon Coast. It is such a boring place. Those stupid eagles floating in the sky and those puffy slimes are so annoying! And worst of all, there was nothing he could do about it!
On the other hand, the Scout Knight who was ordered to keep an eye on me had quite a bit of fun with the children.

Yet another forest in Mondstadt. That Knight Scout named Amber seemed to know her way around this place well. The explosive toy he carried with him caught my eye. With a few tweaks, I can easily turn it into something that could turn this forest and even the nearby mountains to ash.
My proposal seemed to scare her. But I think the idea of ​​an explosive stuffed animal is brilliant.
I'll give it a try if it's missing next time.

I finally got rid of that stalker from the Knights of Favonius. This valley I found on the northeast shore of Lake Cider is still protected by some ancient mechanisms, but the soldiers responsible for defending the pass for the King of the Tempest were nowhere to be found. The only things that survived the wind of time were the unintelligent Hilichurls and silent mechanical guards.
My experiment of controlling Ruin Guardians with Hilichurls also failed. The guardian broke into pieces and ... Well, let's not talk about the Hilichurl tied to the guardian. Oh, and not even half of the ruins, which were also destroyed.

Brightcrown Canyon leads to the gigantic ruins of the ancient city built by the cruel Decarabian, King of the Tempest. The city was built in the shape of a ring. Apparently each resident was assigned their own place between the inner and outer ring. Right in the center of the city was the high tower where the King resided.
The ruins of the cruel monarch, who once tried to control the lives of his people, are now nothing more than a deserted place.
I blew up some passageways so that people could climb the tower more easily. I like how it turned out, because the ruins look older now.

«A magazine of the Adventurer's Guild. Each issue features unique Teyvat locations. This issue includes a short travel diary of Alice the Traveler in Liyue »

The northern course of the Bishui River, which flows here into a wetland, continues south through the enormous Stone Gate through a landscape of reeds that extends to the horizon. At the southern end is an inn built on a giant stone: the Wangshu Inn, the highest point in the Dihua Swamp. Further south, one can see in the distance the Guili Plain and the distant Guyun Stone Forest over the sea. On the roof of the inn there was a slightly strange young man whom I hardly ever heard say a word. The meals at the inn were like banquets, and the kitchen was perfectly equipped; perfect for practicing alchemy.
Speaking of alchemy, I have a couple of ideas for making an explosive catalyst. If there is nothing unforeseen, I will stay here for a few more days and then I will leave for the Guili Plain.

I reached the Guili Plain a few days earlier than planned.
According to ancient books, this place was a very prosperous market before the War of the Archons.
Here, wild foxes and finches are impressive, with very shiny fur and feathers. But I heard the people of Liyue complain that these animals eat their offerings for Archon Geo. I wonder if that gives them a fruity aroma when roasted. Maybe I should go hunting.
There is a very strict security check on the main road, but the guards are very friendly. I made a potion with some indigenous herbs and gave it to one of them for his stutter. It cured him, but it had some minor side effects. Now she can't help but constantly imitate everyone she talks to. Not only what they say, but also the tone in which they say it. And, hey, it does it perfectly.

According to what I was told, an Adeptus lives on top of a mountain in Juenyun Gorge hidden among the entire sea of ​​clouds. Many Liyue herbalists claim to have seen the Adeptus' abode in all its glory, but in my own experience, if you eat a few rare mushrooms, you can see a similar landscape.
The terrain in this area is fascinating. There are stone pillars that should only appear very deep underground, as well as a large reservoir of underground water. Will the Juenyun Gorge become part of the seabed again if all this water flows there? My traveling companion Zhongli, a person who is always serious, started to laugh out loud at my theory.
It's a bit weird.

I've heard that mist often invades the sea off the Yaoguang Coast, and when there is more of it, you don't even see the fingers of your own hands. What a pity not to have arrived in time to see it.
On the beach there are beautiful seashells. How many of them have been there since the War of the Archons? I made a necklace out of some, which was crushed by the butt of the fisherman at the inn. Not a shell was left intact.
And, besides, I had to pay her medical expenses because the pieces of conch shell had injured her.
There is a giant seashell on the beach where the Bishui River empties. There lives a very kind old lady whose family, according to what she told me, sailed here in the conch. The old woman, for her part, is dedicated to saving the castaways who reach the coast. If you turned that conch into a self-propelled boat, it would surely make your rescue tasks easier.
But after I lost control of my third prototype boat-shell and it exploded, the kind old woman said that she was not going to rescue me anymore.

This is the place where Archon Geo defeated the sea monster. Some of the great stone pillars that span the ocean floor still rise above the surface of the sea, although many were broken long ago. The six pillars, formed from a conglomerate of Geo energy, are truly fascinating. Seen from above, one gets the impression that they were deliberately setter just as they are to make a specific shape over the ocean. Perhaps that was the real reason why Archon Geo rained spears on the seafloor?
It seems that Zhongli, who is from Liyue, knows the local legends well, although I have never seen him come here. In the distance is the Wangshu Inn. Surely the strange young man at the inn is looking in this direction right now.
The flow of the ley lines in this place is unique, much more dynamic and free than in the rest of Liyue ... It is as if there is an implacable power waving weakly in the depths of the ocean. The monster the Archon defeated may still be writhing in pain at the bottom of the sea.

The meaning of Lupical ❯