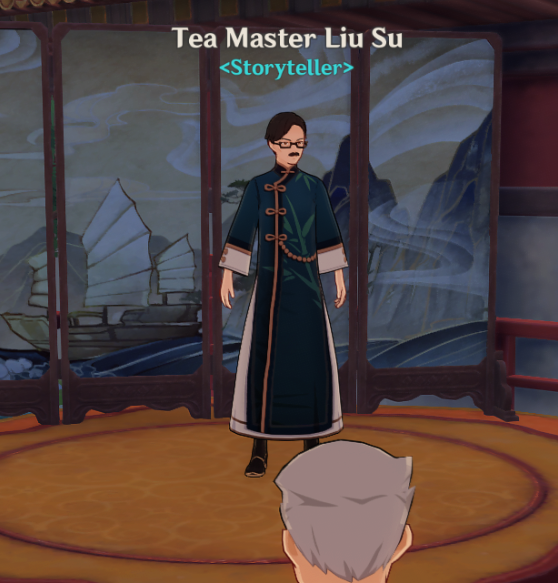 
El Tea Master Liu Su is a non-playable character in the Port of Liyue. A storyteller from the Heyu Tea House, he can be found standing on the stage in front of the staircase leading to the Bank of the Northern Kingdom.

Listening to all their stories will give you The Legend of the Fragmented Packet Vol. III.

It also gives the non-playable character's commission "Moment of Suspense", in which he can complete Beidou's story (Haishan's Wrath) or Xingchiu's story (Rain of Blades).

Tea Master Liu Su was hired by Fan Erye, head of the Heyu Tea House, to serve as its narrator. He also used to be the superior of Tian Tongue of Steel.

Tell a story to anyone who chooses to listen. It has several different stories that it runs through; These include stories about Beidou, Ninguang, Rex Lapis and Osial, Xiangling, and Xingchiu.

"The tea shop closed due to the low season." "If you need to see me, come to Liyue. —Tea Master Liu Su"
Brief Dictionary of Hilichurlio ❯