«A Protodraizard Geo awakened after a long sleep and can absorb the force of the elements to launch a primordial Rain infused with the element Hydro, Pyro, Cryo or Electro. When this attack hits a character protected by a shield, the Proto-Dragon Geo takes a reduced amount of damage. If the elemental type of the shield and Primordial Rain are the same, or if it is a Geo shield, the reflected damage is greatly increased. »

El Protodragarto Geo It is a boss introduced in Version 1.3 and a mature version of the Geo Dredge.

It can be found in the Tianchiu Valley, Liyue. It can absorb different types of elemental energy to unleash a Primordial Rain infused with Hydro, Pyro, Cryo, or Electro. When defeated, the player must consume 40 Original Resin to claim their rewards, consisting of Artifacts and Character Ascension Materials for various Characters affiliated with Liyue. It takes 3 minutes to respawn.

“The huge and powerful Geo Dredgers, which have lived many, many years, can adapt to changes in the elemental environment. It is said that after the incident with the dragon that destroyed the Tianchiu Valley, the Geo Dragarts and Geo Protodragartos plunged into the depths of the earth while waiting for an opportunity to resurface ... »

The boss can be infused with the elemental power Electro, Pyro, Hydro, or Cryo. The color of the item will be reflected in its appearance.

Even the mountains tremble

“Very violent earthquake occurred in the Tianchiu Valley, awakening a long-forgotten threat.
Defeat the Geo Protodragartos that have occupied the caves of the Tianchiu Ruins and restore peace to the region! » 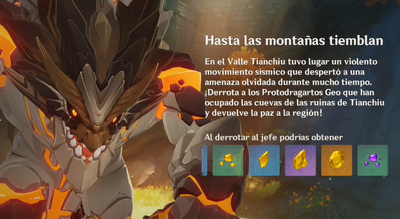