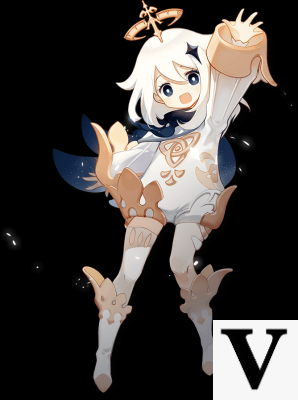 Accompany the Traveler throughout his adventure in Teyvat as a guide. He met the Traveler when he caught her in a lake where he mentions that he would have drowned if he hadn't taken her out. He currently represents Genshin Impact and is on the Genshin Impact app, website and social media icons.

Paimon has a small body, which gives him the appearance of a fairy. He has thick white hair trimmed just above his shoulders, dark purple eyes, and fair skin.

She wears a long-sleeved white sweater and a star-studded midnight blue cape, and white stockings with white boots. Rose gold embroidery and shapes are attached to her jumper, boots and sleeves.

Paimon's accessories are a dark purple, almost black hairpin, and a rose gold crown that levitates above her head like a halo.

Paimon is bubbly, outgoing, but almost a little too honest and is often rude. She makes it clear who she favors; who likes and who doesn't like, for example, since he doesn't like Venti, makes this very clear by calling him a "cheap bard." She stands up for what she thinks and makes it pretty clear. It tends to refer to itself in the third person.


He loves eat; Despite its small size, it can devour large amounts of food before feeling full. He also knows well the history behind many dishes. While he enjoys Slime products, he also claims that his worst nightmare is being eaten by a particularly large Slime.