Order of the Abyss 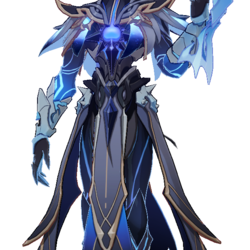 «A group made up of non-human monsters. They live in virtually every corner of the world and are enemies of surface civilization. »

La Order of the Abyss is an enigmatic but powerful army of monsters who have a strong hatred for all humanity and seek to destroy them. They are one of the main antagonistic factions in the history of the Teyvat chapter. The Abyss Mages and Abyss Emissaries are the only known monsters that are apart from the order so far.

It's chaos and destruction. It is an accumulation of madness beyond our perception that corrupts the very foundations of this world. That is why not even the Dragon of the East, the servant of a deity, could withstand its corrosive powers. »

Originally, the Order of the Abyss are the ancient citizens of Khaenri'ah, the pride of humanity. However, they were turned into monsters when the gods of Celestia declared war on them 500 years ago and destroyed their country.


Currently, the Order is led by the brother or sister (depending on our choice at the start of the game) of our character, captured and apparently abducted by the Unknown Goddess.