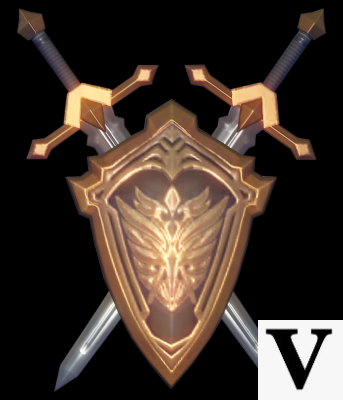 An order responsible for protecting Mondstadt and its belief in freedom. Although its members are known as knights, none have been knighted by any royalty - knighthood is a title earned for the noble duties they assume. »

Each filtering bag Knights of Favonius (also known as Ordo Favonius) are the order of knights that protects Mondstadt, founded by Vennessa with the help of Barbatos 1000 years ago, to prevent aristocrats from ruling the land as Archon Anemo originally intended.

The knights act as representatives of the law of Mondstadt, keeping its citizens safe and creating and upholding laws for all.

Currently, Grand Master Varka is out of Mondstadt on an expedition with his squad towards Snezhnaya. Instead, Jean, who holds the title of Knight of the Dandelion and Knight of Dandelion, occupies the position of Grand Master Quartermaster.

The tradition of the Knights of Favonius dictated that the titles of "Lion" and "Wolf" were reserved for those with great leadership potential. Such individuals would one day assume the office of Grand Master, dedicating themselves to the leadership of a multitude of knights and the safeguarding of Mondstadt. As such, the Grandmaster and the Assistant Grandmaster are knights who have earned one of these two titles. So far it appears that "Knight of Boreas" counts as a "Wolf" title, but is more specialized, so not everyone with a "Wolf" title is a Knight of Boreas.

Serving under the Grand Master are the Captains, of whom there are ten. Albedo, Eula, Kaeya, and Hertha are currently the only known captains.

There are other subdivisions within the Knights of Favonius, such as the Explorers.

Many people have acted as key members of the Knights of Favonius during the course of the game as playable characters, each assigned a particular job. According to the voice line "More about Kaeya - II", there are ten captains. The top gentlemen so far are listed below:

"The Knights of Favonius once had a formidable team of archers known as the Scouts."


The Scouts were a subdivision of the Knights of Favonius, established and led by Amber's grandfather. They were trained in their archery style and in the use of wind gliders, and were famous for their skill. However, after his abrupt disappearance, the Scouts lost their discipline and skill as rumors circulated that he had defected from the Knights of Favonius. Eventually, they became nearly obsolete, and Amber remained the only member of the division.

Also, some characters have been introduced as members of the knights, but so far they don't play such an important role.

Some characters used to be part of the knights, but they have since left.