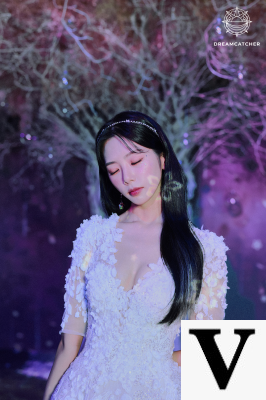 
Jiu is a non-playable character in Liyue. It can be found near Hulao Mountain, below the Sometedragons, a large tree with blue branches on Nantianmen Mountain. Despite residing in Liyue, he despises Morax and instead worships Azhdaha, an ancient dragon sealed beneath the Dragon Slayer.

In Historia Antiqua Act II: More than a simple stone the truth behind Jiu is revealed; she is a fused part of the spirit of Azhdaha. She is not a possessed human like Kun Jun, she is completely Azhdaha, the embodiment of her rage. It was originally sent to see if the people of Liyue remembered Azhdaha. Enraged after finding out that he did not, Azhdaha began his plan to escape his seal. After completing the legendary quest, she will disappear from the overworld and can no longer be interacted with.

Despite taking the form of a girl, Jiu appears to be much older than she appears: she talks about humans as if she is not one of them and mentions events that happened thousands of years ago. He also describes Morax as a usurper, longing for the resurrection of the old man trapped beneath the Dragon Slayer.

In their dialogue, Jiu talks about an ancient being who has been trapped under the tree by the Adeptus thousands of years ago and tells the Traveler that his resurrection will come soon. A nearby stone stele indicates that the being is the "evil dragon" Azhdaha, who was suppressed and trapped in the tree by the Adeptus to preserve lives in the world. However, this being is slowly consuming the tree and becoming one with it, giving a section of the tree blue veins and ghostly blue branches. When the dragon emerges, it will completely consume the tree and absorb the energy from all the ley lines in the world.

During the events of More Than Just a Stone, Jiu attracts a mining team to excavate the area below the Sometedragons. Zhongli, the Traveler, and a man named Kun Jun catch her while investigating the team's disappearance and follow her to the Domain below the Dragon Slayer, where it is revealed that she is in fact a deadly vessel representing Azhdaha's anger and desire for revenge. towards Morax and humanity.

To hasten the destruction of the seals that bound him, Azhdaha created Jiu so that he could work on breaking the seals from the outside while his main body broke them from the inside. Doing this, however, also allowed a fragment of his consciousness that still retained his memories and goodwill towards humanity to escape to warn Morax of danger. This fragment happened to possess Kun Jun's body, but due to lack of power, he was unable to remember its purpose, only that he had to search for a legendary mineral called Dragonite. The fragment of Azhdaha that Kun Jun possesses, remembered everything during the battle against the main body of the dragon and helps the group in the event that a character is knocked out.

After Azhdaha's main body is subdued a second time, Kun Jun confronts Jiu and reveals the truth about themselves: how Morax had granted Azhdaha the ability to see and live on the surface, and the two became close friends before the "erosion" faded from Azhdaha's memories and sanity, forcing Morax and the Adeptus to seal it off. In his last act of clarity, Azhdaha realized what was happening and let himself be sealed, but the erosion made him forget that part as well, leading him to believe that Morax betrayed him. As the energy used to hold Jiu drained, she vanished with Morax's name on her lips.