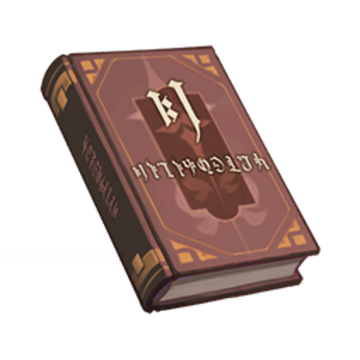 Hilichurl Ballad Anthology is one of the Genshin Impact books.

«The most representative work of Jacob Musk, the laureate poet of Hilichurlio. The author will show you the mysterious spiritual world of the Hilichurls through this collection of poems! »

A collection of Hilichurl poetry compiled by Mondstadt ecology expert Jacob Musk. To complete this book, Musk traveled across the entire continent with the goal of visiting all the Hilichurls tribes. He came to venture into their settlements to become deeply involved in their lives. Musk is lauded as the "Hilichurli Poet Laureate" for this book, but it was evident that neither the scholar nor the Hilichurls particularly appreciated that honor. As an old man, Jacob Musk, while enthusiastic about his studies on the Hilichurls, hated to be equated with them.

Possibly a battle song sung by the Hilichurls before dueling. According to my observations, when two or more Hilichurls are present and one of them sings this crude song, they all engage in a frenzied fight.

Song that the Hilichurls sing while dancing around a totem pole. It could be a tribal hymn with a joyous tone often heard at Hilichurl sacrificial ceremonies.

A melancholic song that I heard while conversing with an elderly Samachurl. Although I still do not understand the literal meaning of the poem, the overwhelming pain of the song is enough to amaze the best poets of my place of origin. (Despite the praise, I must admit that the stench the old man gave off hurt as much as the song itself.)

«Are wine and poems part of the Hilichurls' way of life? Are your wishes pure and devout? Hilichurls expert Jacob Musk has all the answers! »

Fourth song:
The whole hopes the whole
Sada shato can
Lamb flour or zido
Unu given

A song sung by Samachurls. Judging by the reaction of the chief of the tribe, the song seems to have a special philosophical meaning between them. It may seem ridiculous to mainstream academic circles, and I have no intention of challenging the more authoritative views, but I am obliged to say that asking whether philosophy exists among the Hilichurls remains a fascinating and romantic literary topic.

Like the people of Mondstadt, the wind-worshiping Hilichurl tribes were often drunk and sang songs of praise to Archon Anemo endlessly. This is an ode sung by Samachurls that can be heard when the entire tribe is drunk.

Sixth song:
One, one
Yaya ika kundala!
One, one
Half given already give it?
One, one
Kuzi meter sister ye
My sister-in-law

A pious ode sung by the Hilichurls only during sacrifices. When singing it, they used to accompany it with percussion, striking the butt of the weaker members of the tribe with planks, which creates a rhythmic sound. It must hurt quite a bit.

Apparently, many Hilichurl tribes had a tradition of exchanging songs around bonfires in the moonlight. This is one of the bonfire ballads sung by the chief as the final song. Upon completion, the chief would yell "nunu" three times, which supposedly means "sleep."