Heart of the Depths

Author and references
Heart of the Depths is a set of artifacts from Genshin Impact. 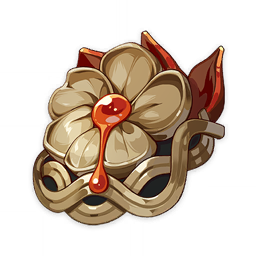 «A brooch whose color and shine have been dimmed, Its original golden coating has been lost due to the erosion of the sea breeze. »

A brooch discolored by the salty sea breeze.
Even a man who roams the oceans
has cherished memorabilia and objects.

The battleship weighed anchor and set sail, and the First
Officer sailed again with the Captain.
By the absurd pursuit of the Captain, and by their own
fuzzy memories
the First Officer mutters a ridiculous
little song of his own making, and accompanies the sound
of the waves and the whales.

"I don't know that song ... Finally you too?
Did you give up the truth and chose the fantasies? "
"The one who lost everything and the one who gave up everything will sink
in a wave in which everything fits ".
"That ending isn't bad at all! Hahaha!" 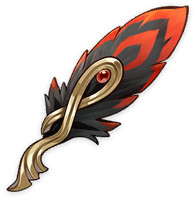 «A feather carried by the sobbing of the sea breeze and the bloody waves of the ocean. Its shape and color have changed over time. »

A red and ominous feather. Maybe it's a symbol
of death.
One day he appeared on the shore next to the remains of a
sea ​​beast.

The cynical First Mate was not originally from Liyue, but
who came from a gray kingdom ruled by the
aristocracy.
Everyone said that he too had noble origins, but
that his younger brother banished him for sullying the honor
of the family.
But that must be nothing more than unsubstantiated rumors
since, when he arrived at the port, all he had was a
sprat
and a small sapphire feather pinned to his cape.

Then the tramp went out to sea following a
Captain and faced the big waves and the creatures
marine.
The sapphire-colored pen was dyed the red color of the
blood and stained with sea salt.

In his last moments,
clearly remembered the past that alcohol had
made forget.
Like a treasure that the waves wash up to the beach ... 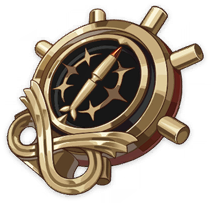 «A compass made of copper whose hand always points to a very distant cost and a port whose existence is not known. »

The copper-colored compass of a cabin boy.
Life among the waves is always turbulent,
and this compass always points to the heart of those who
sustains.

The rough Captain once used this compass to guide
his giant ship,
conquer the most treacherous seas and dominate the
more superlative swirls.
I also guide the one who hid his deep hatred
behind his uninhibited laughter,
and that, lost and desperate, he was only looking for death and
the alcohol...

"The petty thieves always end up on the gallows ...
is your song about? "
"As long as there is room for me, they can bury me in the
belly of a fish, if you like ... "
"Didn't you sign a contract when you boarded here?"
"You haven't forgotten that, have you? Hahaha!"
"It's okay that you haven't forgotten ... because it's time to
fulfill it ".

Chalice of the Depths 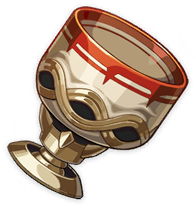 «A faded chalice that someone took out of the water by chance. Its soft colors murmur stories that took place under the waves of the sea. »

A somewhat discolored chalice, but very elaborate.
delicate and polished by the sands of the seabed.

This exquisite cup fell from the hands of the First
Officer and only splashed lightly as he passed through the
ocean surface.
What did you see between the schools of fish and the dim light of the
bottom of the sea?
What did you hear in the silent alley, in front of the arabesques
of the lattice?
The golden chalice slowly dipped into the dreams of the
sea ​​monster, in the dream of the First Officer ...

"This mark of sin is due to you. You will pay for it one day."
The moon illuminated a sapphire gaze and a scar that
pierces an eye.
In his memories, her face glowed brighter and brighter and
it became colder and more arrogant,
but is unable to remember what he answered, and
he soon feels dejected.

"Now that I think about it, how many times have I already forgotten the
last?".

Ha, and what does the past matter? "
"All deaths are in vain, and delve into the past
it's no use". 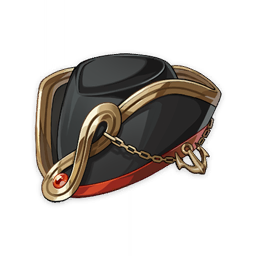 «An old captain's hat with a stench of alcohol that is impossible to remove. On it, there are some wine stains. »


A cocked hat that reeks of alcohol.
Its shape reveals the position of its former owner.

The First Officer drank so much that he was rarely seen
sober.
The acrid smell of alcohol always surrounded him as he
he muttered his fragmented memories under his breath.
Yet the Captain, smiling, never scolded him, and
he continued to entrust him with great responsibilities.

"Because neither of us have anything to lose,
truth? LOL!".

"A gust of wind blew the hat away
stained with wine, and the waves washed him away. "
"Those who are destined to lose their homeland get into
desperate battles. "
"They seek to recover from the depths what they lost
in the ocean of memory ".

"The wind and waves are favorable. I found it."
"That huge beast that devours me in my dreams ..."
"The time for revenge has come. Hoist the sails!"

1.0 version Heart of the Depths was added to the game. Flower of Life Statistics