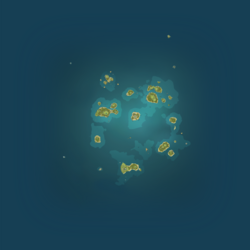 El Golden Apple Archipelago was a limited-time region that appeared in Version 1.6. It is a set of islands to which King Dodo invited Klee in the mission: Mysterious Islands: Journey into the Unknown. Here the player is introduced to the Breakwater system. Map Part 2 is unlocked after completing the quest: Summer Vacation - Proceed with Caution.

According to Venti, the archipelago used to be called Islas Hair. The islands originated approximately 2600 years ago during the Mondstadt terraforming; As Barbatos reformed the region, he split a piece of mountain that landed face down in the sea to become the archipelago. Lisa also mentions that she "does not belong to any nation", which probably means that she is not claimed or put in the eyes of another nation.

The area appears to be operated by an unusually large mechanism that has yet to be seen until now. Initially, the islands were covered in a dense fog that made traveling to the islands extremely dangerous and inaccessible for most. This, along with the changing tides and winds, also made it difficult to escape once someone reached the islands. While hilichurls are present in the archipelago, it is unknown if they had been there first or if they somehow sailed towards it.

Groups of ships would periodically end up wrecking on one of the many islands and outcrops. Several people tried to escape taking note of the unusual features of the archipelago, but it is unknown if any of them were able to escape. Those who did not try to escape, or survived their failed attempts, eventually came together and created a civilization. The victims caught included people from Mondstadt, Liyue, and even Inazuma. One Inazuma ship in question had most of its treasures taken away, except for one samurai puppet, which was mostly damaged and left inactive.

The archipelago was originally larger, but by mechanism or by natural causes, the sea level began to rise, forcing people to move higher. It is unknown if they managed to escape or died, as there are no headstones and very few monuments.

Some years after the archipelago was abandoned, in modern times, Klee received a letter from the "King Dodo" threatening to take away Dodoco unless he could prove himself. With the help of the Traveler and Paimon, Klee was able to find the location of the archipelago, as well as the means to get there, and Grand Master Quartermaster Jean and Deaconess Barbara also decided to accompany her for her safety. The five were taken to the archipelago by Dvalin, summoned by Venti. There they would begin to search for the "King Dodo" and learn about the archipelago's mysterious history in the process.

The group is eventually joined by Kaeya, Diluc, Albedo, and Razor, who were also flown to the archipelago by Dvalin, but were separated when Razor jumped mid-air. Each also received a letter from the Dodo King with different personal messages addressed to their concerns, causing everyone to mistrust the Dodo King's true identity.

After solving the mystery, it is revealed that Alice, Klee's mother, had taken the group to the archipelago to ensure her daughter had a memorable summer vacation. She had visited the area before and found the scenery and history beautiful, and spent some time decorating the islands for her daughter's enjoyment.

Once unlocked, the archipelago can be accessed on the map through the map tabs, along with the Teyvat map and the Kettlebell map. When zooming out, the names of the four main regions will appear:

In Act I, each Island has 1 Teleportation Point and 1 Breakwater Summon Point. The player starts at Pudding Isle. One can follow the Glowing Beacons to unlock the Teleportation Points in a "counterclockwise" manner, heading north to Sister Islands, then west to Partida Island, then south to Danger Island, although it is easier to click. "Navigate" the blocked Teleportation Points and head straight for them from there, in any order you like.