The banners / flags are the possible offers or wishes that can be requested in the Gachapon, at the beginning when the Gachapon is unlocked, you will find a minimum of 2 Banners:

Later, as there are events, or new characters come out, they usually take out another type of banner:

The Gachapon option is unlocked alongside the Shop Menu option, talking to Jean after defeating Stormterror when she appears in Mondstadt (city). 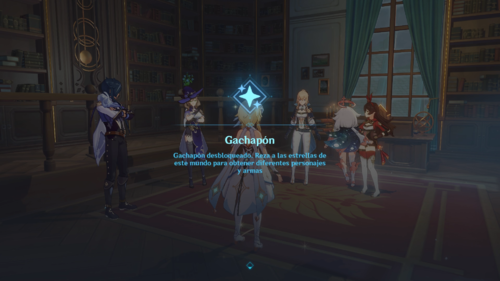 What you will always get a minimum in Weapons is 3 stars and in the case of Characters a minimum of 4 stars (since there are no characters with fewer stars).

In the Gachapon it is possible to get:

These percentages are not precise, since they are constantly changing, to obtain exact percentages, click on the "Details" of the Banner.

A 4-Star character or weapon is guaranteed for every 10 Wishes. If a 10 or 4 star weapon or character is obtained during these 5 wishes, the counter is reset.

Ode of the chalice

Loneliness of the nobility

Invitation to the mortal world

Dance of the lanterns

Ode of the chalice II

Loneliness of the Nobility II

Leaves in the wind

Tapestry of the Golden Fire