Author and references
Emerald Green Shade is a set of artifacts from Genshin Impact.

2 pieces Anemo Damage Bonus + 15%. 4 pieces Increases Whirlwind damage by 60%. Depending on its elemental type, it decreases the enemy's corresponding Elemental RES by 40% for 10 sec. 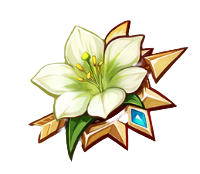 «In the past, this flower bloomed everywhere. When the hunter left, he used it as a brooch. »

A white wildflower that used to cover the whole earth.
Hasn't withered in the slightest and still emits
an exquisite fragrance.

In the days when wildlife still roamed the land
and the monsters were not born,
the Huntress used this flower to cover her human scent.
The old people used to say that in order to find the
silent and affable Huntress,
it was enough to close your eyes and go barefoot lightly
fragrance of that wild flower in the forest.
But so as not to alarm her with the rustling of the leaves, it was
it is vitally important to walk as a hunter does.

It is also said that the one who finally found the Huntress was a Boy.
At that moment, disaster fell on the ancient kingdom and misery spread throughout the land. 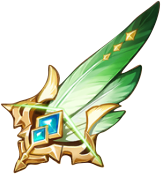 «The feather of an arrow that long ago attacked its prey. It is still just as smooth and clean. »

A shiny, gleaming hawk feather. Ever
it was used as the tail of an arrow.

In the past, the Huntress would reassure prey that
pierced with his arrow
until his body quietly returned to the
Earth. In his heart,
She knew that one day she would go to the same place as the souls of her prey.

The Huntress believed that in the end her life would awaken
from reality,
and would meet the dead in an endless field
hunting.

But he also believed that the moment his arrow
pierced the monster that was chasing the child,
that field without limits disappeared.
It was not for survival or naturally, but rather
hunted with hatred and thirst for revenge.
In that instant, the immeasurable hunting ground
got out of hand.

Serenity of the Emerald Green Huntress 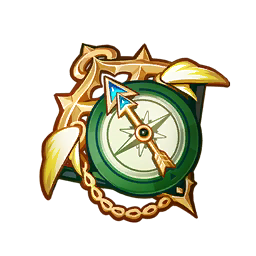 «An incredible device carried by a hunter. It always points in the direction of its prey. »

A delicate device that always points the way
Right.

Legend has it that when the Huntress walked
barefoot in the field,
the grass under his feet whispered what the
birds from the trees,
and the mud that stepped on told him what the roots of the
Earth.

But it is also said that, after the disaster, the grass
And the trees never spoke again
because the god of the woods had died.

Since then, the Huntress depended on this device.
to hunt.
At the boy's request, he no longer hunted birds.
Instead, their prey became the monsters that
they brought destruction and suffering to the world.

Canteen of the Emerald Green Jacket 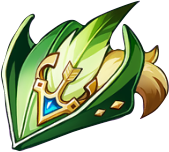 'A canteen to store water. Its interior is much larger than it seems. »

A durable, leak-proof container.
The legendary Huntress used to use it to store
whispers that were heard by the bonfires.

One night, he smelled another human being.
As a hunter, she was not afraid of wolf packs or
monsters.
Joining a campfire chat was so much more
terrifying to face the beasts.
The Huntress had long ago forgotten how
speak the language of humans.

No one had ever heard him say a single word, or
even after agreeing to become the Huntress
Emerald green.
Besides, he never left a trace of anything.

He collected the laughs and talks he heard that night and the
he kept it in his water bottle.
For many years, whenever she felt lonely, she used to
hear the voices coming out

«The crown that a hunter proudly wore in the past. It is green in color like wild nature. »

A hunter's hat without any blood stains.
According to popular lore, it belonged to the crownless king of
the hunters.

Never become the enemy of the earth and the
forests. That's the hunter's rule.
Instead, a hunter must become a part
silent of nature.
It is said that a bird once built its nest in
this hat.

No one could crown the best hunter,
since the only thing above her was nature.

In the moments of greatest danger,
his hunting hat was the vision that most
terrorized monsters

1.0 version Emerald Green Shade was added to the game. Flower of Life Statistics