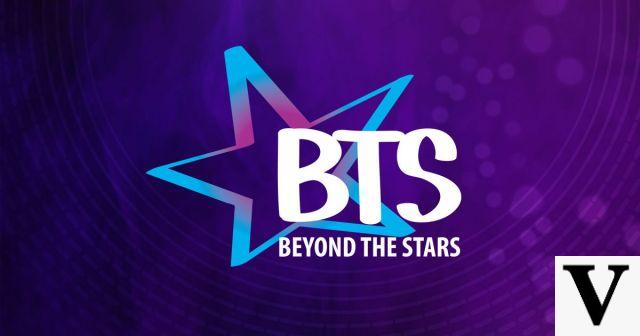 Beyond the stars is the first act of Mona's legendary mission: Astrolabe.

During the event, the Traveler ran into a passing astrologer and had offered her help to retrieve her teacher's personal belongings in exchange for her brother's location.

When the Traveler and Paimon leave Liyue Harbor, they are greeted by Mona (whom they recognize if they are investigating meteorites). Mona asks them to accompany her to retrieve a box in Mondstadt on behalf of her teacher, as she needs their help to fight the guardian of the box. She does not know who the guardian really is, since he is the friend of her teacher who stayed on an expedition of her own, and wants to demonstrate the power of astrology. He also offers to investigate their fate for them.

Before heading to Mondstadt, Mona asks them to accompany her to Mr. Zhu's Inn to say goodbye to the owner while providing her with good food at low cost. Mr. Zhu tells them that he lost a ring to a Slime and asks if someone could return it to him, offering 20 Mora in exchange. Mona becomes excited at the prospect of finding the ring, which Paimon considers contrary to her beliefs.

Remembering the elemental bait they used to aid Diluc in a crisis, the Traveler returns with some and places them near the inn, defeats all the Slimes, and claims the ring. Just when Mr. Zhu was about to give them the money, Mona snatches it from him, claiming that they need to "act" like a disciple. Starving, Mr. Zhu notices that Mona hasn't eaten in days as she hastily tries to silence him. He then offers to invite the Traveler to the Wangshu Inn.

Arriving at the Wangshu Inn, while the Old Man and Paimon devour a host of extravagant meals, Mona, ordering after the couple, awkwardly orders just a salad. Realizing that her portion is unusually small, combined with her discomfort, the Traveler and Paimon realize that Mona has no money left for food and decide to cook her a meal. Based on the innkeeper's recommendation, the Traveler settled on the Golden Crab, to which Mona happily ate and exclaims that "she has never eaten better." After lunch, the trio head to Stone Gate and meet a group of itinerant merchants who offer to take them to Mondstadt, as they had already finished business in Liyue. However, Mona sees through his lies, revealing that those merchants are actually bandits in disguise and subdues them.

Finally, upon reaching Mondstadt, they head to the city where Mona says they are about to meet the guardian. Just as this happens, Klee comes out, recognizing the Traveler and Paimon. Mona claims that she is the guardian of the treasure, much to the Traveler's perplexity, as they believed she was referring to Lisa. Klee doesn't understand what Mona is saying, so Mona asks her if her mother is Alice. Klee then realizes that Mona is friends with her mother and asks if Alice taught her any knowledge. Klee tells her that Alice only taught her how to make Bouncy Bombs, causing Mona to realize that they can't have a contest if they know practically nothing. Mona asks Klee about the fifty-year deal and a box, which Klee seems to remember and runs off to find the box.


The Traveler accompanies Klee to Windbreaker while Mona stays behind to collect the belongings she dropped in her haste, including a book. They are attacked by Slimes Dendro, but can retrieve the box regardless. They return to see Mona reading the book in hopes of gaining some insight as it fell from Klee's backpack. Mona then retrieves the box from Klee but finds nothing, just as Klee says she put all of her "treasures" inside and replaced what was originally inside. Mona frantically asks for the original content, but Klee points out that it is the book Mona is reading. As Mona scrolls through the book, she realizes that it is her teacher's journal. Completely embarrassed and in full panic, she claims that she will end because her teacher told her never to read her diary. Klee flees on suspicion that he is going to get in trouble.

Unsure of what to do since he has gotten nothing on his trip to Mondstadt and has no Mora, the Traveler helps Mona by going to Katheryne and asking for a commission. Katheryne tells them that there is a laboratory that someone had sealed; although others might dispel it, they have their own labs. Bringing Mona home, he dispels it with his astrology. The home's owner, Goth, is grateful for Mona's help and offers to rent it for the lowest possible price, much to her disdain, but she agrees that the other option is to be left homeless. Regardless, Mona thanks the Traveler for their help, but informs them that it will be some time before she can investigate her destination. Due to their journey, Paimon is concerned that Mona is passing out from hunger and suggests that they check her out from time to time.