Ballads of the Knight 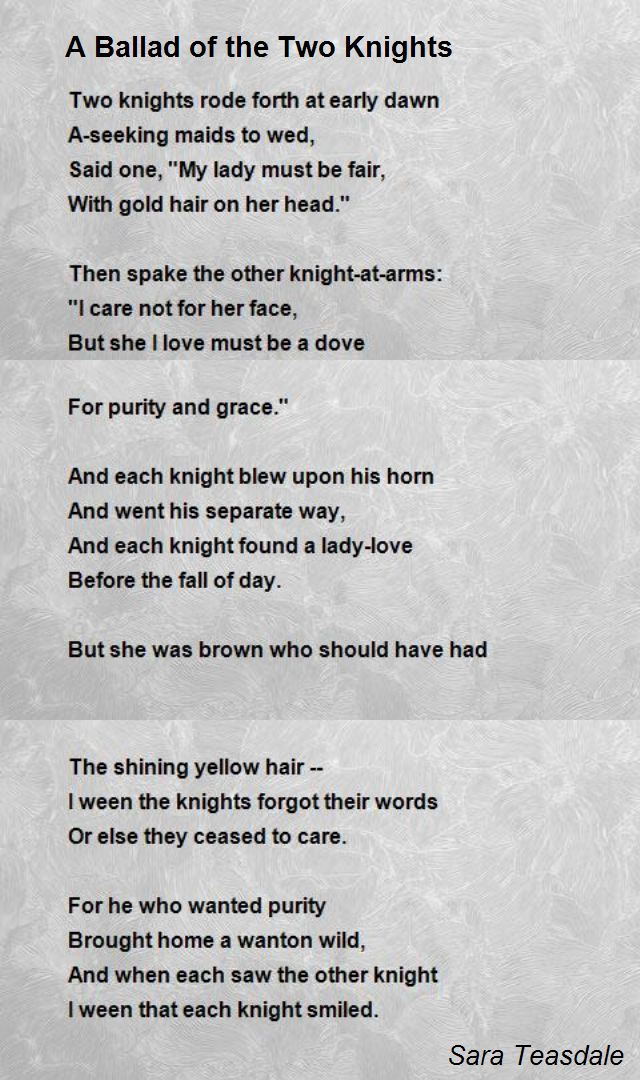 Ballads of the Knight is one of the Genshin Impact books.

«Collection of poems in circulation from the days of the old aristocracy. They are said to be the own words of Ragnvindr, the Knight of the Dawn. In them he describes his chivalric life. »

I've been through all the streets of Mondstadt.
The air was permeated with the stench of misery and the hum of revelry.
I saw the most arrogant of aristocrats,
and also the most miserable of the poor.
At night, these streets are like a cobweb: some celebrate a feast and others are the prey.
I hear a tinkling in the night, and I know it is the chains of the souls of the oppressed.

I patrol the streets of Mondstadt at night,
where my peers and superiors once announced:
"We are the knights of the stars. Raise your heads and be our witnesses.
Because we, who raise our flag in the starlight, are the true protectors of Mondstadt! "
I have not raised my head to gaze at the stars, nor have I looked at our flag once,
Well, I can't divert my attention from the dirty streets.

The ruined street vendors cry silently;
veteran soldiers writhe in pain.
In the deadly still of the night
a young woman, rejected by the Aristocracy, pleads with Barbatos for mercy.
The sighs of the mourning winds make the cathedral door rattle.
Bearing the pain of the oppressed, they storm the towering palace walls.

The scream of every mother,
the cry of each child;
enough to dent the toughest of shields;
Enough to defeat the sharpest of swords.

Wailing sadness makes me shiver.
But in the palace and in the castle,
Although the wind blows the same as it does in sacred land,
they are nothing more than the sigh of an ant to the ears of a man.

«Collection of poems in circulation from the days of the old aristocracy. They are said to be the own words of Ragnvindr, the Knight of the Dawn. In them, he describes his encounter with the swordsman dancer. »

One day at dawn
A dancer whose sword was her song came to Mondstadt.
Although there was no part of her body that was not chained or handcuffed,
in his silence there was a song:
The song of freedom, of a brighter dawn beyond the walls;
A ballad that an unbridled people sang with joy.

She was the Morning Light of the Wanderer's Orchestra,
but also the one that dyed the Aristocracy with blood.
I once asked him: "Why do you come to overthrow our aristocrats?"
"Don't you know they are our leaders?"

"Why do you put their lives on a pedestal?"
His voice was like a cool breeze.
"If you affirm that the wind is your companion,
So isn't freedom too? "

He told a story to his lonely listeners:
a story about the ancestors of our rulers, who had great power;
a tale of angels, archons, and vile dragons;
a tale of the deities and peoples of all the earth.
Every myth and every legend became a song
that the wind carried to all corners of the kingdom.

In the arena of aristocrats, his sword sang once more.
Although it was his last masterpiece, he did not do it perfectly.
A nameless knight retrieved his sword from the blood-soaked battlefield,
and buried her where the gentle winds gather.