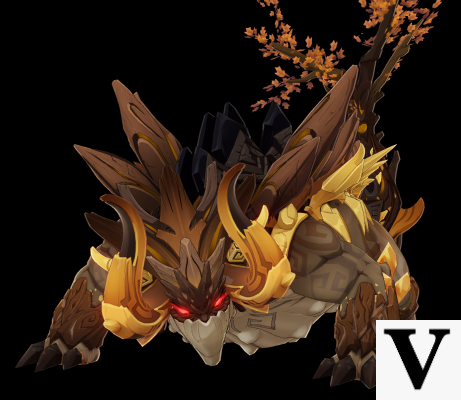 This article is about the character. For the head of the Reminiscence Domain, see Under the Dragon Slayer.


«A huge dragon as old as the mountains themselves. In an era that had everything but was lost in oblivion, he was at the side of the one who reigned over the rock port. But in the end, the two had a conflict, and the dragon was banished to a dark place deep within the earth. Through the long years of his imprisonment, his power has slowly been lost. It has also been disfigured by various types of erosion to which it has been subjected. The faint sound of the dragon master's shackles and his furious roar echo through the mountain caves like memories of a lost age. »

Azhdaha (Persian: ژدها, Azhdaha; translated as "Dragon") is a dragon mentioned in some Liyue legends.

In version 1.5, Azhdaha was introduced as a weekly boss in the domain Under the Dragonbender.

Azhdaha is the oldest of the Dragartos. According to legend, he was born blind but wished to see life on the surface, and was granted the power of sight by Morax himself. As part of her contract with him, Morax warned him that if Azhdaha jeopardized Liyue's peace he would not hesitate to seal him underground. Azhdaha became a friend to both Morax and humanity, taking a special interest in blacksmiths.

As time passed, Azhdaha began to suffer from "erosion"; he forgot Morax's face due to Archon Geo's absence, and when humans began venturing into Sima to mine, they disturbed the ley lines within, causing Azhdaha much suffering. Regardless of Morax's attempts to stop the "erosion" process, Azhdaha began attacking the humans he swore to protect, forcing Archon Geo to intervene along with the Mountain Shaper, Sculptor of the Moon, and an unknown third adeptus who has been lost to history ever since. Because Azhdaha was an ancient elemental being, he possessed formidable strength that made work difficult for Morax and the adeptus. However, with Azhdaha's remaining consciousness wishing to accept her fate, they eventually managed to seal her corrupted self in the Dragon Slayer, located in Nantianmen. The battle resulted in the creation of the Dragonite.

Azhdaha would never forgive Morax for this supposed "betrayal", and in time he was able to manifest a portion of his power in a container called Jiu. Long after Osial's defeat, the crazed Azhdaha made his move to free himself from his prison, causing Jiu to manipulate various miners to excavate and lift the seal. However, unknowingly, this attempt also allowed the remaining benevolent part of his consciousness to escape, who possessed a human (Kun Jun) to warn Morax of the events. Azhdaha was sealed once more with the help of the Traveler, Morax's human container (Zhongli), and a fragment of Azhdaha possessing Kun Jun. The benevolent side of himself later peacefully dissipated after speaking with Morax one last time.