Author and references
Ancient Ritual of Nobility is a set of artifacts from Genshin Impact.

2 pieces Ultimate Skill Damage + 20%. 4 pieces After casting an Ultimate Skill, increase the ATK of all team members by 20% for 12 sec. This effect cannot stack. 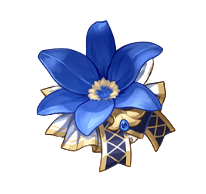 «A satin flower with a glossy finish, suitable for an elegant gathering. It still looks as distinguished as it did the day it was discarded. "

A blue lily made of silky satin.
It served as a headdress of a noble woman.

A noblewoman who was part of the Mondstadt aristocracy got rid of him.
In that legendary time, the nobles were an example to follow.
They not only guided their subjects with their exemplary demeanor and wisdom,
they were also the highest representatives of the people of Mondstadt.
They were noble both for their lineage and for their commitment to their virtues and principles.

The longevity of the nobles was shortened by their tireless lust, which deteriorated the semblance of magnificence of which they boasted. 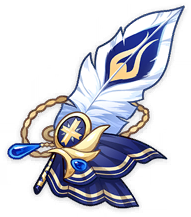 'Feather hat accessory worn by the old Mondstadt aristocrats on the hunt. Stand proudly as if no time had passed »

The feather of a hawk perched proudly on the hat of an old nobleman.
There was an ancient tradition that consisted of going hunting with the common people and sharing the loot with them.

Hunting was common, a pastime of the Mondstadt ruling class.
The hunt was a feast shared with his servants and the common people,
intended to show the benevolence of the nobles.
In fact, for the people it was cause for celebration.

However, this activity soon lost its meaning.
The nobles claimed all the spoils of the hunt in full and did not share it with the people.
The feather was still standing, but its color faded for the people. 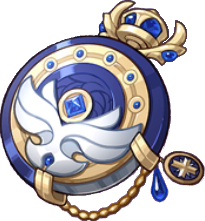 'A pocket watch that belonged to the old aristocrats of Mondstadt. Transmitted from generation to generation, it has witnessed many years of history »

An exquisite pocket watch made of sapphire.
It still works even after so many years.

The pocket watch of a nobleman who was part of the aristocracy that ruled over Mondstadt. It still indicates the exact time.
Punctuality was a virtue that the nobles were able to fulfill thanks to this pocket watch.
They did it more out of self-discipline than to set an example for ordinary people.
A good nobleman had to be more attentive at dawn and more thoughtful and restless late at night than other people.

Over the years, his lazy descendants replaced strict honor.
Their watches became ostentatious, and the sense of what they symbolized was lost. 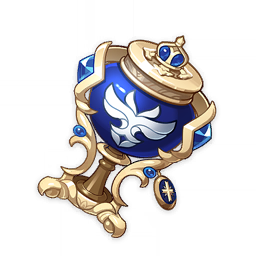 'An ornamental urn that belonged to the ancient aristocrats of Mondstadt. Gloomy winds seem to resonate in its empty interior »

An ornamental urn made of sapphire, decorated with the silver insignia of a noble family.
It is exquisite, elegant and showcases the aesthetics of the ancient nobles of Mondstadt.

It is the legacy of a nobleman who was part of the ruling aristocracy of Mondstadt.
Its extravagant interior ornamentation is long gone.
His luxurious accessories were a symbol of the status and wealth of the nobleman,
as well as the confidence, pride and prosperity of the people of Mondstadt.

Then the nobles fell prey to their own power.
They did what they wanted and spent money without regard for people.
Thus, the luxurious accessories became a worthless burden. 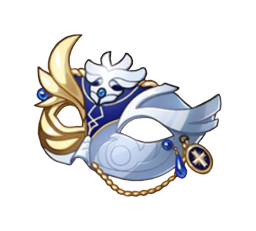 Masquerade mask worn by the old aristocrats of Mondstadt. His sunken eyes are fixed on the golden days of the past »

A silver mask inlaid with gold and gems, engraved with delicate patterns.
Made with great meticulousness, it is a testament to the refinement and customs of the ancient nobles.

The first nobles to rule over Mondstadt were heroes from humble origins.
The great heads and elegant princes, as well as the beautiful princesses and noble ladies,
they once welcomed people to their banquets and parties.
In days gone by, nobles were not stingy and displayed their wisdom and elegance.

In that golden age, the nobles shared their knowledge and earnings with the people.
But they succumbed to power, and the banquets were only for their own pleasure.