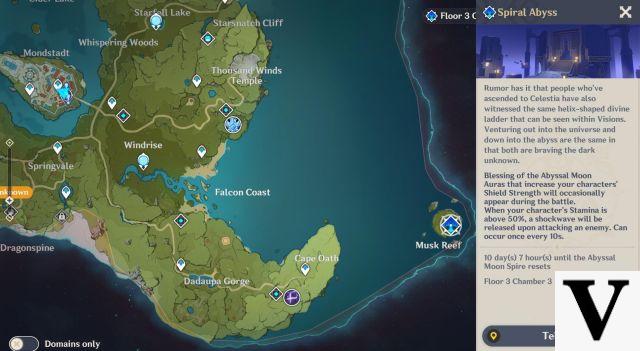 
“Rumor has it that the people who have ascended to Celestia have witnessed the same spiral-shaped divine ladder that can be seen in visions. Venturing into this universe and descending into the abyss are alike in the sense of heading into the unknown in the dark. »

~ Description of the adventurer's manual.

La Abyss Spiral is a special type of domain unlocked upon reaching Adventure Rank 20, located on Musk's Reef and accessible through a wormhole in the sky near the edge of Cape Oath.

It consists of two main parts: the Abyss Corridor (floors 1-8) and the Abyss Lunar Spiral (floors 9-12). The corridor rewards can only be obtained once, and clearing all the floors unlocks the Spiral. Spiral rewards reset on the 1st and 16th of the month during Syzygy's Moment.

You can see your current progress on the map, next to the resin counter. If there is no Abyss Spiral challenge, it will say "This round's challenge has not started."

Stars, chambers and floors of the abyss

The Abyss Spiral is divided into 12 floors, each containing 3 chambers. In the Abyss Corridor, all enemies have the same level. In the Abyss Lunar Spiral, enemies in the chamber gradually increase in level.

All chambers have challenges that can be completed for additional rewards in addition to the reward for clearing them. Currently there are only 2 types of challenges: one where the player has to overcome the chamber with a time limit, and another where a Monolith of ley lines must have a specific amount of life. Entering the next floor requires having achieved at least 6 stars from the abyss of the previous floor, as well as having surpassed the 3 cameras of the previous floor.

The total number of stars is retroactive, that is, it is not necessary to clean the entire floor to get more stars. If the player has obtained 3 stars from the second and third floor cameras but none from the first on their first try, they can retry the first camera as many times as they want, with the stars obtained on those attempts being saved even after exiting and restarting. floor.

Seemingly following the lunar cycle of another world, the Abyss Moon Spiral resets twice a month on the 1st and 16th of the month, which may also cause a new Abyss Moon Blessing period to begin. However, the generous treasures found in the Abyss Corridor that connect the world to the Abyss Spiral will not change or reset over time.

There are multiple restrictions on the Abyss Spiral. When facing each floor, the player cannot:

Additionally, each floor of the Abyss Spiral has a different anomalous ley line effect, which can benefit or harm characters, enemies, or both. To complete the challenge more easily, you have to consider the enemies in each chamber and the effect of anomalous ley lines.

Blessing of the Abyss

The eternal whisper of the Abyss Spiral encourages you to go deeper. Choose your blessing from the abyss ... »

Challengers will receive recognition from the depths of the Abyss Spiral. This recognition comes in the form of an upgrade that helps the player in combat.

When starting each chamber, the player can choose to receive a Blessing of the Abyss. Different blessings have different effects and durations:

When a character's normal, charged, or descendant attack hits and deals physical damage to opponents, this character's Critical Chance is increased by 3% for 10s. The effect stacks up to 5 times, and only applies once at a time no matter how many enemies have been hit. Stacking 5 effects, critical hits on opponents will release shockwaves that deal area damage. These shock waves can be created once every second.

When an active character unleashes a Whirlwind reaction on a nearby enemy, they will cause a shockwave at the opponent's position that deals area damage. A shock wave can be created in this way every 3.5 seconds.

Starting on the 5th floor, the Abyss Spiral diverges into two paths. To go deeper, the player must assemble two teams of up to four characters to challenge each half of the chamber. The same character cannot be used on two teams.